More work to do

In late 2000, the PKF started working with California’s Assemblyman George Runner to pass legislation for a state-wide Amber Alert system. The PKF coauthored a resolution that was introduced on April 2, 2001 and passed the Assembly unanimously on May 14, 2001 but then sat idle for 14 months. During the time that the resolution was awaiting a signature from Governor Gray Davis, the PKF contacted his office a number of times to inquire about when it would be signed.

Then, in early 2002, a string of high-profile missing child cases hit the news. First, on February 3rd, 7-year-old Danielle Van Dam was abducted during the night in San Diego, CA, and following that, on June 5th, 14-year-old Elizabeth Smart was abducted from her home in Salt Lake City, UT. 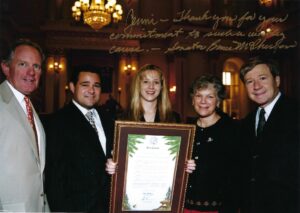 About 3 weeks after Elizabeth’s abduction, PKF staff contacted the Governor’s office again and said, “Please don’t let another child go missing before the Governor signs this bill and gets an Amber Alert system in place.” His staffer responded by saying they wouldn’t.

Less than a week later, on July 15, 2002, 5-year-old Samantha Runnion was abducted from her front yard while playing with a friend. A political reporter, Marcy Brightwell, from News 10 in Sacramento, contacted the PKF and asked again if we were ready to do a story on the Amber Alert, as we had been declining to do so hoping the Governor would sign the resolution.

Jenni Thompson, then Director of Public Affairs, met Ms. Brightwell and taped an interview at the California State Capitol which was shown to the Governor later that afternoon. He responded by saying he was not aware of the issue but would sign into law any bill that the legislature would get him to put a state-wide Amber Alert system in place. Fortunately, the Governor and other stakeholders, including the PKF, began working on a system immediately in anticipation of the law passing.

While the beginning stages of work were in progress, PKF again worked with Assemblyman Runner to coauthor Assembly Bill No. 415. That bill passed the Senate on August 21st and the Assembly the following day. Governor Davis signed it two days later, making it the law that California have a state-wide Amber Alert System, making us the 14th State to embrace this tool to recover our abducted children.

Once California was on board, PKF decided to tackle another problem; there were 36 other states that needed to follow suit. We made it our mission to have a state-wide system in all 50 states. We started a campaign called Amber Alert Now, urging other Governors to create state-wide Amber Alert’s for their abducted children and by February 18, 2005, all 50 states had done just that, and America’s children were safer because of it.

On August 18th of 2002, in the midst of the California legislature working to pass the Amber Alert bill and our work on our newest campaign, the PKF was honored to receive Member Resolution 1692 from Senator Bruce McPherson and Assemblyman George Runner on the floor of the Capitol for demonstrating a “relentless dedication to bringing this system (Amber Alert) to fruition in California,” and stated that our “unexcelled enthusiasm and commitment to enhancing the safety of all of California’s children will long inspire the citizens of the state.”

After the original resolution had passed in California, the PKF took the bill to the United States Congress to solicit support for having a national Amber Alert network. Representative Martin Frost and Senator Kay Hutchison were both enthusiastically willing to Sponsor bills that would do just that. The National AMBER Alert Network Act of 2002 was introduced in the Senate on September 3rd, with 41 cosponsors, and passed in the Senate just 7 days later. On September 4, 2002, an identical bill was introduced in the House, with 112 cosponsors, and but failed to advance past the Judiciary Committee before the 107th Congressional Session ended.

At the beginning of the 108th Congressional Session, no one had given up on the idea of creating a national Amber Alert network so again, two identical bills were introduced, Senate Bill 121 (January 9th), with 38 cosponsors, and House Bill 412 (January 28th), with 230 cosponsors. Clearly, the support and interest still remained among congressional members, so we were hopeful it would pass.

Again, the Senate passed their bill in record time, a total of 12 days, but the bill continued to be stalled in the Judiciary Committee on the House side. The PKF traveled to Washington, DC and spent countless hours fighting for the passage of this clean Amber Alert bill but eventually found that there was a larger bill that that committee was intent on seeing passed, so they put the Amber Alert Network language into that bill to ensure its passage. House Bill 1104 was named the Child Abduction Prevention Act and included other measures pertaining to child safety issues. After years of lobbying for a national Amber Alert network, the PKF kept their sights on that portion of the bill and continued visiting Congressional members asking that they allow it to pass. 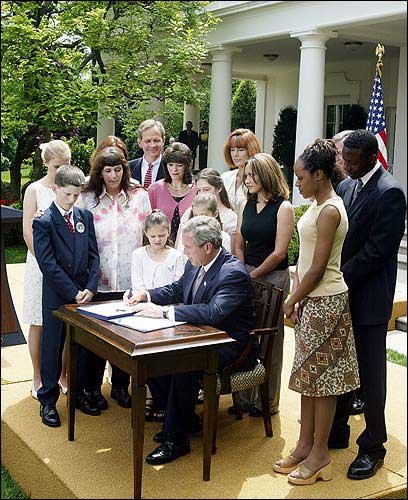 Fortunately, on April 10, 2003, what has now become known as the PROTECT Act (Senate Bill 151), passed and was presented to President George W. Bush for his signature. At a ceremony in the Rose Garden, of which PKF staff were invited to and attended, President Bush signed the bill into law, surrounded by Amber Hagerman’s family (Amber Alert’s namesake), Elizabeth Smart and her family, as well as two California girls and their families who were there because the Amber Alert saved their lives 7 days after California’s plan went into place.

Still More Work To Do

Initially, Congress provided $5 million dollars to establish and run the National AMBER Alert Network with the name now also standing for America’s Missing: Broadcast Emergency Response. An AMBER Alert coordinator was assigned within the Department of Justice and they worked with professionals in the field to develop best practices, the uniting of state systems, training programs for law enforcement professionals and their partners about abductions and the use of the Amber Alert system. The program was up and running in a short amount of time.

The following year however, Congress removed the funding for the AMBER Alert program in its annual budget. Leaders of the program approached the PKF because of our involvement in passing the law and asked for our assistance. We immediately began a grassroots campaign to contact members of Congress and ask them to reinstate the funding. Within the first 24 hours, people in every state had responded and not only was Congress inundated with letters from our constituents, but so was the President. The funding was reestablished, and the national AMBER Alert program continues to be a large part of why this program works so well.

As of December 15, 2020, 1,029 abducted children have been successfully recovered, thanks to the Amber Alert and all of the increasing technologies that are now being used to get the Amber Alert out to as many people as possible. 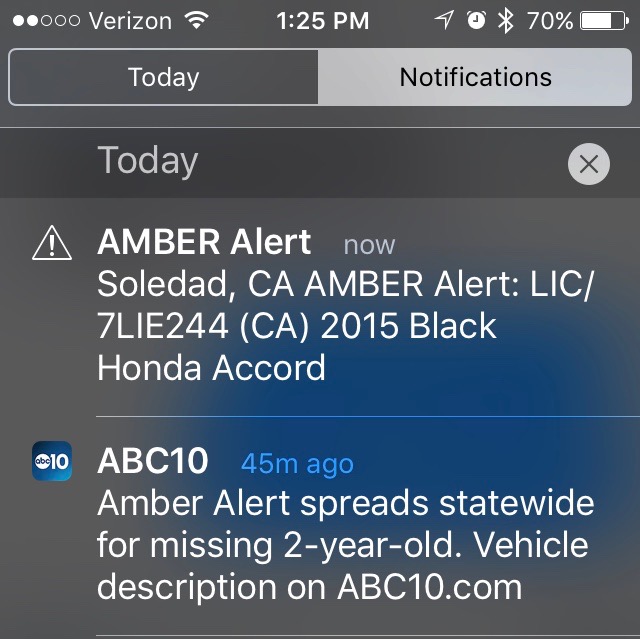