If you have information concerning this case, please contact:
The Richmond Heights, MO Police Department (314) 645-3000
Tweets by AMBERAlert 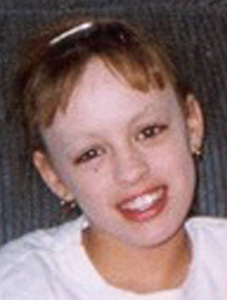 Heather was babysitting a 2 month old infant the evening of July 14, 1999. At approximately 2:00am the morning of July 15, 1999, a neighbor saw a child, believed to be Heather, being carried out of the apartment by an unknown white male. She was wrapped in a comforter. Investigators found a small amount of blood inside the apartment. Foul play is suspected. Heather is diabetic and needs insulin injections daily. If Heather is being held captive, sugared foods and water can sustain her for some time according to her doctor. Heather's photo is shown age-progressed to 19 years by the National Center for Missing and Exploited Children.